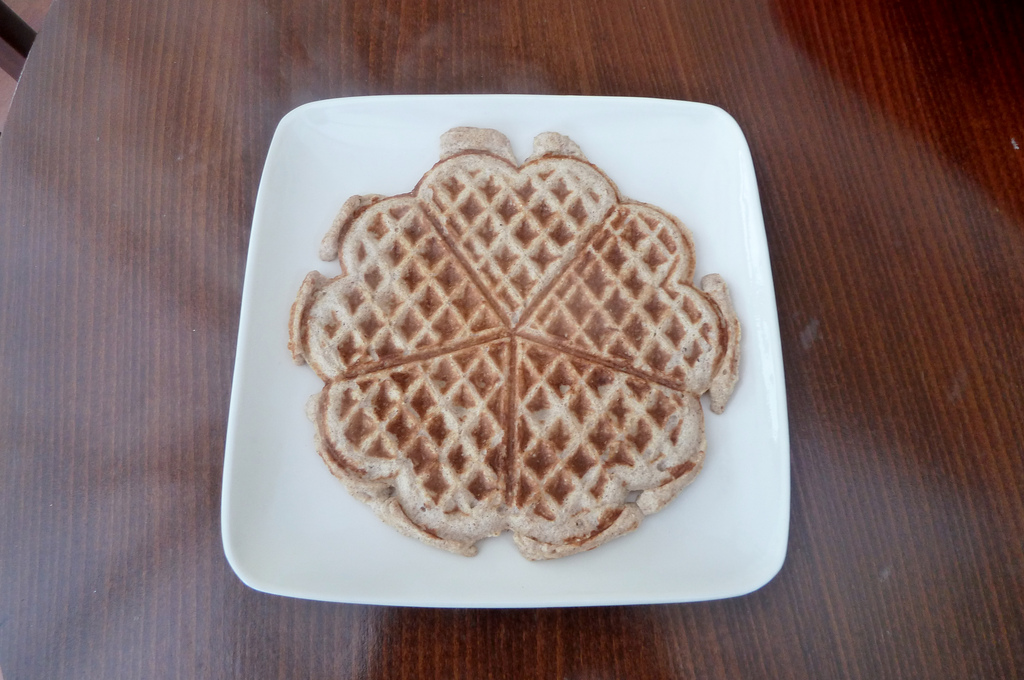 It seems that the Dukan diet is sweeping the whole world , not just the nation (please get the media to stop with Carole Middleton and how she got her figure!). It does have some weird and interesting recipes (mainly with oat bran admittedly) and I mentioned that I wanted to make the muffins on our Facebook page. However, the Greek friends on there shouted out in despair about the galette. It seems people find it impossible!

All the chums on facebook (and twitter) are saying that this galette comes out horrible, gets stuck, it’s really hard. So, did my research and here I am with my photos. Put the oat bran in a bowl Add fromage frais and the egg (remember, if you’re worried about cholesterol – you should be – just add the egg white) I added a bit of cinnamon cause I don’t want to be smelling the egg. Stir everything together thoroughly.

You would be excused for saying “Auntie Sofia, that’s fine, I bloody know how to stir – the point is how you blooming cook it in one piece without it getting stuck“. There’s a trick dear boys and girls! Some of you INSISTED that the Dukan diet does not allow oil. I don’t know where you read that but it’s a LIE (heed me I tell you). I read the book and every time it talks about frying something it instructs you to use a bit of oil (always olive oil in this blog) and just wipe it with a kitchen towel. This means that whatever you are cooking will not get stuck on the bottom and you won’t be left with too much oil. Spread EVERYWHERE (sides included) with a kitchen towel. After this your pan should be a bit shiny only! If you have a sea of oil empty and repeat. Pour the mixture in the pan (mid-gas and make sure the pan is hot). DO NOT TOUCH the damn galette as it will break. After about 1 to 2 minutes (depending on how hot the pan is) do this: With a tablespoon or bendy/ silicon spatula ease the sides, just to make sure it’s not stuck. Then use a wide spatula to turn the galette. And behold! We have a galette! For some reason (don’t ask) I have a waffle maker. It’s the easiest way to make this galette. Just as with the pan you will need a bit of oil. However, you will not be able to wipe it so just use a brush and don’t pour too much. It will be impossible to get rid of it if you overdo it. The excellent bit with doing this in the waffle maker is that you don’t need to do anything else. Just close it and wait. My waffle maker’s little light goes out when it’s time to open it so no chance of accidents if I try to open too soon. And behold! We have a galette! (albeit looking a bit like a waffle)

There is a third alternative way according to Katerina on our Facebook page. After numerous attempts she now uses a silicon cake pan and just shoves the thing in the oven. This is a great idea as silicon pans won’t let the food stick to them.

———————–
Digital Scullery has no affiliation with the Dukan diet. If you want to do any diet we would advise you to consult a doctor.